Like us on Facebook, follow us on Twitter! Check out our new tumblr page. :)
Manga News: Toriko has come to an end; but be sure to swing by and share your favourite moments from the series!
Manhwa & Manhua News: Check out the new Manhwa and Manhua shout-out (March 2016).
Event News: One Piece Awardshas concluded. Check the results Here!
MangaHelpers > Manga > Browse > Blood Rain
Home
Chapters
Translations
RSS 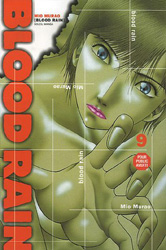 In high school, Aihara Kumi and Kawashima Rinko were the managers of their high school baseball club. After graduation, they both decided to move to Tokyo. One day, three years later, two members of their baseball club are murdered and Kumi starts receiving strange phone calls. Rinko tells her it's probably just a coincidence, but could these murders and phone calls be the start of something more sinister?! [vintagemistakes]