Like us on Facebook, follow us on Twitter! Check out our new tumblr page. :)
Manga News: Toriko has come to an end; but be sure to swing by and share your favourite moments from the series!
Manhwa & Manhua News: Check out the new Manhwa and Manhua shout-out (March 2016).
Event News: One Piece Awardshas concluded. Check the results Here!
MangaHelpers > Manga > Browse > Blue Drop
Home
Chapters
Translations
RSS 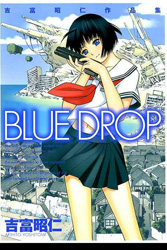 The decisive factor in the Arume's victory is the use of biological weapons and a modified version of an alien toy called Emiru Force. Along the years, the remnants of this weaponry have become dangerous creatures which the government (ran by the aliens) has to deal with. This is the main premise of the original Blue Drop manga, which is set around a thousand years after the war. The military uses an experimental vaccine that gives human children special abilities for a determined period of time. During this time the military forces them to confront the weapon remnants, an action that usually ends up in the children's death. Most of the chapters follow the conflict between the military and the resistance, which tries to save those who have been given the vaccine, as well as the relationships between the people involved. In addition, the story introduces the aliens' traits and behaviour. All of them have blue eyes and their blood turns milky white when it touches air, but their main characteristic lies in their gender: they are all female, and their sexual orientation is homosexual. [Wiki]

A collection of five sci-fi one-shots from the creator of Eat-Man, set in a world where people are still dealing with the repercussions of a war fought with aliens many years ago.