Like us on Facebook, follow us on Twitter! Check out our new tumblr page. :)
Manga News: Toriko has come to an end; but be sure to swing by and share your favourite moments from the series!
Manhwa & Manhua News: Check out the new Manhwa and Manhua shout-out (March 2016).
Event News: One Piece Awardshas concluded. Check the results Here!
MangaHelpers > Manga > Browse > Bokko
Home
Chapters
Translations
RSS 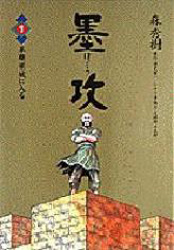 2300 years ago in China there existed a clan called the men of Bokk trained to aid and defend threatened cities with their lives. Kakuri, one of these men, is summoned to the little city of Ryo. Distrusted and even hated, Kakuri eventually gains the trust of Ryo's citizens as Tcho empire's vast army sets their camp on the other side of the river.