Like us on Facebook, follow us on Twitter! Check out our new tumblr page. :)
Manga News: Toriko has come to an end; but be sure to swing by and share your favourite moments from the series!
Manhwa & Manhua News: Check out the new Manhwa and Manhua shout-out (March 2016).
Event News: One Piece Awardshas concluded. Check the results Here!
MangaHelpers > Manga > Browse > Boku wa Tomodachi ga Sukunai+
Home
Chapters
Translations
RSS 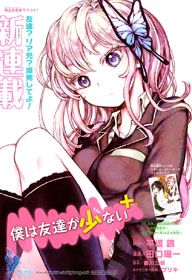 It appears to be a re-telling of Boku wa Tomodachi ga Sukunai.

Hasegawa Kodaka has transferred to a Christian school, and he's having a hard time making friends. It doesn't help that his blond hair and sharp eyes tend to make people think he's a delinquent. One day, he sees his classmate Sena, a cute, rich, smart girl who's even good at sports, alone in a classroom. She appears to be talking with a friend on the phone, but on closer inspection, he discovers that she is talking to a video game character. Now that he's discovered her secret, that her best friend is a simulation, they embark together on a quest to make new friends.

When Sena's simulation-inspired techniques for friend-making fall flat, Kodaka founds a club called "Rinjinbu" (Neighbor Club) for the stated purpose of making friends. Will Kodaka and Sena be able to gather club members, and finally learn how to build friendships? [tethysdust]