Like us on Facebook, follow us on Twitter! Check out our new tumblr page. :)
Manga News: Toriko has come to an end; but be sure to swing by and share your favourite moments from the series!
Manhwa & Manhua News: Check out the new Manhwa and Manhua shout-out (March 2016).
Event News: One Piece Awardshas concluded. Check the results Here!
MangaHelpers > Manga > Browse > Air Gear
Home
Chapters
Translations
Forums
RSS 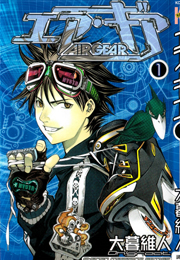 Itsuki Minami needs no introduction - everybody’s heard of the “Babyface” of the Eastside. He’s the toughest kid at Higashi Junior High School, easy on the eyes but dangerously tough when he needs to be. Plus, Itsuki lives with the mysterious and sexy Noyamano sisters. Life is never dull, but it becomes dangerous when Itsuki leads his school to victory over some vindictive Westside punks with gangster connections. Now he stands to lose his school, his friends, and everything he cares about. But in his darkest hour, the Noyamano girls come to Itsuki’s aid. They can teach him a powerful skill that will save their school from the gangsters’ siege-and introduce Itsuki to a thrilling and terrifying new world.

General Overview: The story revolves around a boy fated to be at the centre of a world revolution. While the boy simply wants to enjoy life with his friends, he becomes embroiled in a fight for energy revolution and the freedom of storm riders everywhere.

Art: 8
The artwork is great, While at times, some of it can dip, it's overall consistency and originality cannot be ignored.

Plot: 9
We're talking about one of the best plot lines currently available. However it didn't start that way and the transition has been quite rough at times. Now that Oh!G has transitioned from a story about a boy to a story about a group, the plot is nearly unrivalled.

Characters: 8
For me, the main character is the only real negative. Everyone else has managed to get a range of emotion from me, whether i like or hate them, but the main character just seems cliché. However with the scope of the manga having changed from that of a guy to a group, his effect is easily negated.

Theme: 9
I think this goes back to the plot. It's being done in a way that's never been done before, using sports to facilitate it storyline and while the stories of gangs and underdogs have been done before, it's unquestionable that it's never been done in such a manner as this. When you highlight the moral stories such as growth and friendship, you're left in a zone where you question if it's meant to be like that, it's ambiguity only goes to underline the class of the writing.

Originality: 8
One of the most original manga's i've read. Air Treks, Energy Revolutions, Friendship, And fighting styles you'd have never thought of all wrapped up perfectly in near future fiction.

Overall: 9
It's a manga i thoroughly enjoy and am actually disappointed that more groups aren't scanlating it. While some may question the ability of the author to write, i find that it's been engaging me for years and i actually kowtow in admiration. Permalink " "
Review by Mikester207

I have to agree with Sabret00the on all accounts, but one, the plot. Now don't get me wrong the plot isn't bad, but its just, as of late, it's flow has been lacking. The last few ten or twenty episodes have been difficult to follow, more so with the (Warning SPOILER!!!!!) whole battle in the cyber world and a few episodes afterwards. not to mention all the extra "stuff" to the manga, like one day the writer was "Oh thats how i'll explain how they will do that move"(oh and dont get me started on the whole Ohama thing, ugh), and yes i do know this is a manga and that it doesn't need to be real, I just expect that if the manga is set in the real world, like it was in the beginning, then is it too much to ask that it should stay with it's physics, or at least stay with what it started with, or or explain why things change. Yet dispite of all that Air Gear still provides its readers with both kick butt action and ecchi humor(which i find very funny). Permalink " "
Review by nico 2001

thanks for this raw Permalink " "
Review by Amatersu

One of the best mangas out there. Recently re-read it, and it's such a ride. The art is great, Oh!Great really captures the feeling of moving in the air, or at least what I think it would look like. It's also a really funny manga, surprisingly. Read it. You will not be disappointed. Permalink " "
Review by Lee132

This Manga is SO amazing that im actually trying to buy every single volume there is for it so far ive got six and i aint stoppin till i get every1 single 1 :P I know the general description of this manga doesnt sound that great (extreme rollerbladers.. :D) but its actually EPIC it just gets better and better the more u read it!!!!!!! Permalink " "
Review by pedroami

I am only going to point out the strongest aspects of this manga series~ and ones you should reckon with too.

Art: 10
In the beginning - yes, the beginning - it sucks (*laughs* well - compared to now), and now, I've got to say that this guy puts the most detail in his manga than any other that I've seen. It's not just the way he renders each character with an accurate realism that glorifies the human physique, not only the way he captures the world and atmosphere with his precision of shading and detail, but its all the crazy angle shots and perspectives that seem impossible to draw - he *draws them*. Especially when working on a manga like Air Gear, dimension and perspective are in HIGH DEMAND, and he just doesn't deliver - oh no, he goes BEYOND what is necessarily and delivers a breathtaking presentation of how it is to fly in the sky.

Style: 10
The entire theme, along with the story, artwork, and presentation, is one of the most unique things you'll get to see. If you ever watched "Babyface" with Johnny Depp then you would understand the significance of Ikki being called: "The Babyface of the Eastside". Yes, these guys are punks - yes, these guys are HARDCORE - but hey, regardless of who you are you can't help but love em. They're a hip, goofy, resepectable bunch that literally ride their own paths along with the wind. They have unique and dynamic attitudes, (talk about Akito/Agito) just throw a bunch of regular teenagers together that want to have fun and the roller coaster is bound to be fun.

Hotness: 9
Well~ what would you expect? With artwork that's unprecedented its no wonder that the girls and their allure are going to be HOT. Now, Oh Gureeto has been known to do some naughty works in the past, and traces of that can be seen here, but its never too much. Sex appeal just for the sake of sex appeal is high (especially in the beginning with Simca ;D) - and its the type where you don't feel dirty just looking at it.

Storyline: 8
The storyline was very strong in the beginning but over the course of time the quality has seemed to diminish. When it comes to pacing, the manga does a good job of getting things done, but the progression to the main storyline sometimes seems to be lacking, especially in recent chapters. Sometimes it'll be random hotness! But if that's ok with you then let the party go on~ Permalink " "
Review by misc-13

This manga is very original! I love the characters (well, most of the woman annoy me but...) and the plot was great until the most recent chapters... What the flip happened!! What about the team! the regalias! what the flip! "now it all comes down to 2 characters" i hate when authors do this! it's like they just got lazy and had awesome characters sit back! i thought there was going to be a fight with the whole team at the end!! and don't tell me Ringo is going to survive, with a blow like that she should be dead!!!

This better not be the end or I will so die! Permalink " "