Like us on Facebook, follow us on Twitter! Check out our new tumblr page. :)
Manga News: Toriko has come to an end; but be sure to swing by and share your favourite moments from the series!
Manhwa & Manhua News: Check out the new Manhwa and Manhua shout-out (March 2016).
Event News: One Piece Awardshas concluded. Check the results Here!
MangaHelpers > Manga > Browse > Bokura no Yoake
Home
Chapters
Translations
RSS 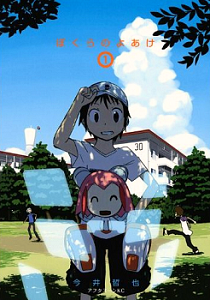 In 2038, Sawatari Yuuma is an elementary school kid who loves everything about space and astronomy. He was initially excited when his parents bought a robot called Nanako, but he was disappointed when he learned that she was basically just a boring housekeeping robot. However, when he does finally try to talk to her about space, something strange happens. Her system crashes and is taken over by what claims to be a marooned alien ship! The alien ship wants Yuuma's help to get back to space! [tethysdust]