Like us on Facebook, follow us on Twitter! Check out our new tumblr page. :)
Manga News: Toriko has come to an end; but be sure to swing by and share your favourite moments from the series!
Manhwa & Manhua News: Check out the new Manhwa and Manhua shout-out (March 2016).
Event News: One Piece Awardshas concluded. Check the results Here!
MangaHelpers > Manga > Browse > Boy Don Quixote
Home
Chapters
Translations
RSS 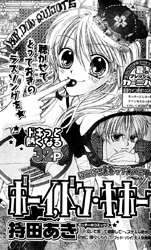 Hiro moved away 5 years ago. She and her childhood friend Ri-chan had promised to meet again and that he would fullfil his dream. And now they are going to the same school. Hiro thinks they will start up where they left off, but Ri-chan is acting very cold to her.

Note: It was later included to a tankoban of the author's short stories called "Kitty" (キティ), which was published in 2005.