Like us on Facebook, follow us on Twitter! Check out our new tumblr page. :)
Manga News: Toriko has come to an end; but be sure to swing by and share your favourite moments from the series!
Manhwa & Manhua News: Check out the new Manhwa and Manhua shout-out (March 2016).
Event News: One Piece Awardshas concluded. Check the results Here!
MangaHelpers > Manga > Browse > Brothers
Home
Chapters
Translations
RSS 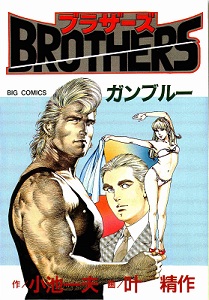 Brothers is the name of a trio who use their incredible gifts to accomplish seemingly impossible missions. Not part of any government organization, they work privately for large sums of money. Their leader is Macky Pluto Kara who has a brilliant mind. The other two are HEM, Homo Electric Mechanics, which means that although they are alive, their cells are made of silicone instead of proteins which all humans are made of. It makes them nearly invincible and allows them to have superhuman powers. Rickey Neptune Kara is a clone version of Macky while Memory is a female HEM who Macky also created. The Brothers are untouchable, even by the CIA, and carry out difficult tasks for their own benefit. [vyc]