Like us on Facebook, follow us on Twitter! Check out our new tumblr page. :)
Manga News: Toriko has come to an end; but be sure to swing by and share your favourite moments from the series!
Manhwa & Manhua News: Check out the new Manhwa and Manhua shout-out (March 2016).
Event News: One Piece Awardshas concluded. Check the results Here!
MangaHelpers > Manga > Browse > Bugs: Predator's Summer
Home
Chapters
Translations
RSS 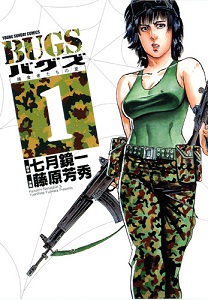 The Special Operations Group (SOG) is a highly classified anti-terrorist division of the Japanese military. Their current mission has taken them into Fukui Prefecture where terrorists have attacked a nuclear plant and have escaped into the mountains. Of the 4 squads, the second squad is lead by Ibuki Aran known to be one of the most combat ready soldiers and who also happens to be the only female member of the SOG. But nothing could prepare the special forces for the enemies that they were about to face. Mutated insects hundreds of times the normal size start attacking the SOG. The praying mantis with its incredible speed and razor sharp legs or hornets with giant stingers which attack in massive numbers. As highly trained soldiers are taken out swiftly, it is up to Ibuki Aran to make sure her comrades stay alive. [vyc]