Like us on Facebook, follow us on Twitter! Check out our new tumblr page. :)
Manga News: Toriko has come to an end; but be sure to swing by and share your favourite moments from the series!
Manhwa & Manhua News: Check out the new Manhwa and Manhua shout-out (March 2016).
Event News: One Piece Awardshas concluded. Check the results Here!
MangaHelpers > Manga > Browse > Burapa - The Black Parade
Home
Chapters
Translations
RSS 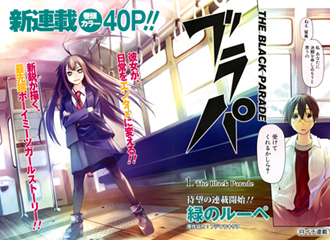 One day, a high school boy named Rumi comes across an abandoned, decommissioned tram car, a place that could make a neat 'secret base.' He also meets the wildly energetic Fujino, who challenges him to a duel over usage of the space. Their duel is actually a very creative, competitive game played out in the public areas of the town. While Rumi almost can't believe what's happening, he has to admit that their 'duel' is the most fun and excitement he's had in a long time, much more exciting than his video games. Before long, Rumi and Fujino are friends, and their adventures with the abandoned tram car, soon named the "Black Parade," have begun! [tethysdust]