Like us on Facebook, follow us on Twitter! Check out our new tumblr page. :)
Manga News: Toriko has come to an end; but be sure to swing by and share your favourite moments from the series!
Manhwa & Manhua News: Check out the new Manhwa and Manhua shout-out (March 2016).
Event News: One Piece Awardshas concluded. Check the results Here!
MangaHelpers > Manga > Browse > Business Commando YAMAZAKI
Home
Chapters
Translations
RSS 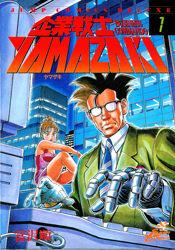 In Japan, the crash of the bubble economy has caused widespread devastation to the business world, resulting in numerous deaths from stress and overwork and the suicide of thousands.

There emerges in this era of turbulence a miracle worker -- a mysterious corporate consultant named Yamazaki Takurou, reputed to possess the ability to overturn the fate of dying corporations in mere days. Though hailed as a messiah, Yamazaki's true identity is known only to a few ...

He is a man who has overcome death to repay the debts his family has accrued. He is Cyborg Salaryman Yamazaki.