Like us on Facebook, follow us on Twitter! Check out our new tumblr page. :)
Manga News: Toriko has come to an end; but be sure to swing by and share your favourite moments from the series!
Manhwa & Manhua News: Check out the new Manhwa and Manhua shout-out (March 2016).
Event News: One Piece Awardshas concluded. Check the results Here!
MangaHelpers > Manga > Browse > Charisma Doll
Home
Chapters
Translations
RSS 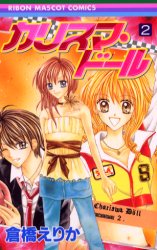 15 year-old schoolgirl Sara has a big secret. She is the "Sala" that is the new top singer! No one knows whether "Sala" is a boy or a girl. She is a huge fan of the No. 1 group "The Rise" who's lead singer, Hayase Shidou, attends Toua High a Special entertainment school along with Sara.

When Sara finds that her boyfriend is cheating on her, and to add insult to injury, she is dumped! He was only attracted to her by her likeness to "Sala". Hayase gets revenge for her in an unusual way which seems to bring them closer together ...but will this be allowed by Sara's mother who is "Sala"'s producer and Co-President of Star Studios? It's a fact that the true identity of "Sala" cannot be revealed, especially not to the lead singer of her main rival "The Rise".