Like us on Facebook, follow us on Twitter! Check out our new tumblr page. :)
Manga News: Toriko has come to an end; but be sure to swing by and share your favourite moments from the series!
Manhwa & Manhua News: Check out the new Manhwa and Manhua shout-out (March 2016).
Event News: One Piece Awardshas concluded. Check the results Here!
MangaHelpers > Manga > Browse > Charon Siphon
Home
Chapters
Translations
RSS 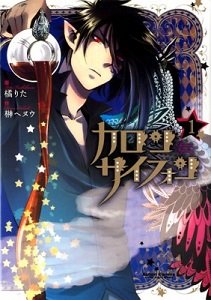 After high-schooler Nanatsu Io is crushed by disappointment in love, she finds herself pulled into a strange cafe, "Cafe Acheron," by pretty male workers, Kiba and Resato. Io decides to change herself by getting a job there as a waitress. In order to do so, she makes a contract with the cafe owner, Kiba, who tells her she must keep her stuffed bear (now conscious and referring to itself as "Father") with her.

It's only after this contract is formed that Io begins to learn the truth! Cafe Acheron connects the demon world and the human world, and it's there that many deals between demons and humans are made. In fact, Kiba and Resato are demons themselves, and Io is already bound to them by contract! Her strange new life is just beginning! [tethysdust]