Like us on Facebook, follow us on Twitter! Check out our new tumblr page. :)
Manga News: Toriko has come to an end; but be sure to swing by and share your favourite moments from the series!
Manhwa & Manhua News: Check out the new Manhwa and Manhua shout-out (March 2016).
Event News: One Piece Awardshas concluded. Check the results Here!
MangaHelpers > Manga > Browse > Cheer Cheer
Home
Chapters
Translations
RSS 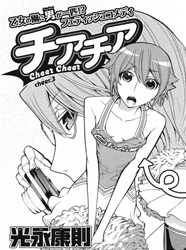 The Otohime Private All-Girls High School is a very prestigious school and full of pretty girls. However, there is one male student attending the school, the director's son Ouji. Ouji is a creepy pervert who can get away with anything because his father doesn't punish him. He's got video cameras all over the school to get footage of his classmates naked or near-naked and constantly sneaks around with cameras to get photos of them. The school is his paradise.

All this will change in the coming year, though. His father has decided to make the school co-ed, but with only baseball players so that they can aim for winning the National High School Baseball Championship at Koshien Stadium. In preparation for this grand dream, the director insists that the girls of the school establish a cheerleading squad. Seeing his glorious world collapsing around him, Ouji latches on to the most hopeful thing he can find: the cheerleading squad. Now he and the reluctant student council president, Itsuki, are going to recruit members and try to get this team going! [tethysdust]