Like us on Facebook, follow us on Twitter! Check out our new tumblr page. :)
Manga News: Toriko has come to an end; but be sure to swing by and share your favourite moments from the series!
Manhwa & Manhua News: Check out the new Manhwa and Manhua shout-out (March 2016).
Event News: One Piece Awardshas concluded. Check the results Here!
MangaHelpers > Manga > Browse > Oniichan Control
Home
Chapters
Translations
Thread
RSS 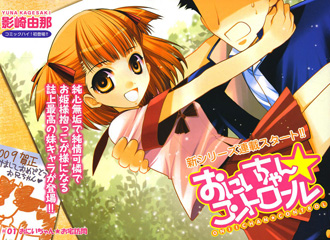 Noa's brother has a huge sister complex. So huge, he attends college in Tokyo just to escape it! Years later, his sister Noa shows up and informs him that she's taking the Tokyo University Entrance exam and that she may be moving to Tokyo as well. Little does Noa's brother know, she has a similarly huge brother complex. Read as Noa's brother attempts to control himself around his little sister, while she sets him up for failure.