Like us on Facebook, follow us on Twitter! Check out our new tumblr page. :)
Manga News: Toriko has come to an end; but be sure to swing by and share your favourite moments from the series!
Manhwa & Manhua News: Check out the new Manhwa and Manhua shout-out (March 2016).
Event News: One Piece Awardshas concluded. Check the results Here!
MangaHelpers > Manga > Browse > Chill
Home
Chapters
Translations
RSS 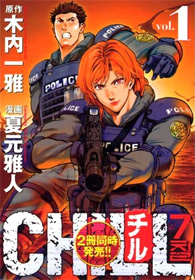 In the near future, a powerful country in the far east collapses, causing many refugees to flee to neighboring countries. Japan is one of those countries and more than 2 million refugees rush to that country, but they are not welcomed with open hands. The Japanese government confines everyone to an island off the coast of Japan and call it “The City.” The City becomes a slum where starvation, murder and sex trafficking is common and the tension between Japan and the City is extremely high.

Hida Riku is a new member of the ACAT, one of the several special forces that were put into place after the refugees fled to Japan, which lead to an influx in crime. Even within the special forces, the ACAT are known for successfully completing even the most dangerous of missions and, at the same time, have an unusually high death rate. Riku gets paired with Akagi Mika, a veteran ACAT women sniper, whose bold moves might get him killed faster than anyone expected. [vyc]