Like us on Facebook, follow us on Twitter! Check out our new tumblr page. :)
Manga News: Toriko has come to an end; but be sure to swing by and share your favourite moments from the series!
Manhwa & Manhua News: Check out the new Manhwa and Manhua shout-out (March 2016).
Event News: One Piece Awardshas concluded. Check the results Here!
MangaHelpers > Manga > Browse > Chinyuuki 2
Home
Chapters
Translations
RSS 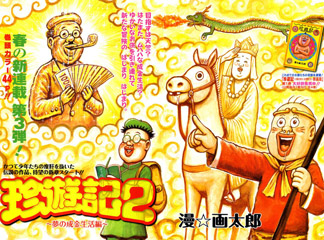 One day, Nyan-nyan sets out fishing for his teacher, Man-man. He sees an old man bullying a turtle, and tries to save the turtle. But the old man claims the turtle had tricked him to the Sea Dragon’s Palace to have his youth sucked out by the Princess. In the midst of the conversation, the turtle knocks out the old man and kidnaps Nyan-nyan.

Man-man realizing something was wrong when Nyan-nyan never returned, sets out himself to search for his disciple...The main characters from the first season “Chunyuuki” (Yamatarou and Genjou) make their appearance in the 3rd chapter. All other characters ever created by GATARO also have a role in this series. [6gatsu]

The sequel to "Chinyuuki", a gag/parody of Saiyuuki (Journey to the West) that was serialized in Weekly Shounen Jump.