Like us on Facebook, follow us on Twitter! Check out our new tumblr page. :)
Manga News: Toriko has come to an end; but be sure to swing by and share your favourite moments from the series!
Manhwa & Manhua News: Check out the new Manhwa and Manhua shout-out (March 2016).
Event News: One Piece Awardshas concluded. Check the results Here!
MangaHelpers > Manga > Browse > Christie London Massive
Home
Chapters
Translations
RSS 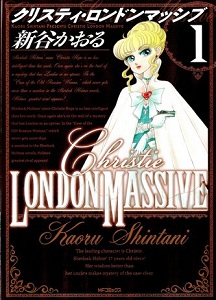 Sherlock Holmes' 17-year-old niece Christie is just as intelligent as her uncle. A lot of things are expected of a young woman from a good family, like Christie, but she has little patience for balls and fashionable corsets. Although she appreciates the maids who care for her, she'd rather spend her time working on interesting cases. In the opening of the manga, she's on the trail of a mystery that has London in an uproar, the "Case of the Old Russian Woman," in which Sherlock Holmes' greatest rival will appear! [tethysdust]