Like us on Facebook, follow us on Twitter! Check out our new tumblr page. :)
Manga News: Toriko has come to an end; but be sure to swing by and share your favourite moments from the series!
Manhwa & Manhua News: Check out the new Manhwa and Manhua shout-out (March 2016).
Event News: One Piece Awardshas concluded. Check the results Here!
MangaHelpers > Manga > Browse > Chubou Desu yo! - Oosaka Yancha Memory
Home
Chapters
Translations
RSS 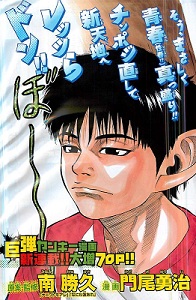 Sappi, who has enormous ears, is just starting his middle school years at a school known for its delinquents. He has his tougher friends, Ryuuji and Kame, to look after him, and he has a big crush on a girl named Sara, who he had admired from afar in elementary school. After Sappi has the first fight of his life, he and his friends are recruited into the gangs of their school. Their delinquent-filled middle school life has just begun! [tethysdust]