Like us on Facebook, follow us on Twitter! Check out our new tumblr page. :)
Manga News: Toriko has come to an end; but be sure to swing by and share your favourite moments from the series!
Manhwa & Manhua News: Check out the new Manhwa and Manhua shout-out (March 2016).
Event News: One Piece Awardshas concluded. Check the results Here!
MangaHelpers > Manga > Browse > Cipher
Home
Chapters
Translations
RSS 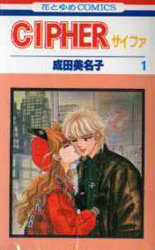 From CMX Manga:
Anise can't believe her luck when she finds herself in the same high school as famous former child star Siva. Although the cool and handsome Siva seems unapproachable, Anise manages to become his friend. But her happiness turns to surprise when she discovers Siva's secret: for years, he's been switching identities with his twin brother, Cipher!