Like us on Facebook, follow us on Twitter! Check out our new tumblr page. :)
Manga News: Toriko has come to an end; but be sure to swing by and share your favourite moments from the series!
Manhwa & Manhua News: Check out the new Manhwa and Manhua shout-out (March 2016).
Event News: One Piece Awardshas concluded. Check the results Here!
MangaHelpers > Manga > Browse > Coelacanth
Home
Chapters
Translations
Thread
RSS 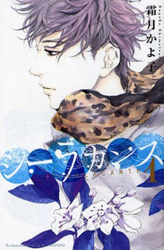 Ten years ago, there was an explosion at Hisano's apartment building. She would have been there, but she'd been hit by a bike ridden by a boy in blood-stained clothes. He dropped a toy scale when it happened, and she's been hanging on to it as a good-luck charm ever since. Now Hisano's in high school. One of her teachers was murdered, and the police are investigating. A young man suddenly appears carrying the toy that scale belonged to. And perhaps... can he also see the hallucinations Hisano has always been plagued with? Everything is connected as the pattern slowly rises to the surface. [Storm In Heaven]