Like us on Facebook, follow us on Twitter! Check out our new tumblr page. :)
Manga News: Toriko has come to an end; but be sure to swing by and share your favourite moments from the series!
Manhwa & Manhua News: Check out the new Manhwa and Manhua shout-out (March 2016).
Event News: One Piece Awardshas concluded. Check the results Here!
MangaHelpers > Manga > Browse > Commander 0
Home
Chapters
Translations
RSS 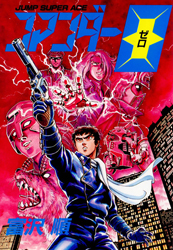 In the late 1980's, law enforcement agencies in Japan assemble an elite, secret unit of crime fighters called the Japan Armed Police (JAP), staffed with superhuman warriors known as Commanders. A young agent codenamed "Commander O" is one of these brave defenders of peace.

From the depths of the criminal underworld emerges a mysterious international arms merchant known as Mister Shuffle, who has links with numerous politicians in the Japanese Diet. Using his wealth and influence, he creates the terrorist organization known as Phoenix, whose purpose is to reshape Japan into a Utopia of his imagining.

When the cyborg agents of Phoenix begin terrorizing the streets of Tokyo, it is up to Commander O and his fellow agents to combat the threat!