Like us on Facebook, follow us on Twitter! Check out our new tumblr page. :)
Manga News: Toriko has come to an end; but be sure to swing by and share your favourite moments from the series!
Manhwa & Manhua News: Check out the new Manhwa and Manhua shout-out (March 2016).
Event News: One Piece Awardshas concluded. Check the results Here!
MangaHelpers > Manga > Browse > Cousin
Home
Chapters
Translations
RSS 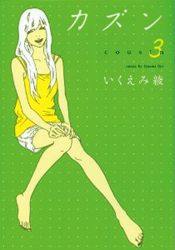 18 year old Tsubomi has a bit of a weight complex. After graduation from high school, she takes up a part-time job at a video rental store where she is introduced to another male employee, 19 year old Shiro, whose shifts always seem to coincide with hers. Shiro casually mentions that she reminds him of someone familiar. A few days later, while on duty, she bumps into a customer in one of the aisles. He leaves, but not without dropping his membership card, and Tsubomi finds out that his name is Nasukawa, and that he is an acquaintance of Shiro's. Meanwhile, after a song for a commercial comes on, Shiro realizes that Tsubomi reminds him of a famous model in a commercial (her "eyes", at least), who turns out to be none other than Tsubomi's cousin...?!