Like us on Facebook, follow us on Twitter! Check out our new tumblr page. :)
Manga News: Toriko has come to an end; but be sure to swing by and share your favourite moments from the series!
Manhwa & Manhua News: Check out the new Manhwa and Manhua shout-out (March 2016).
Event News: One Piece Awardshas concluded. Check the results Here!
MangaHelpers > Manga > Browse > Crepuscule (Muchi)
Home
Chapters
Translations
RSS 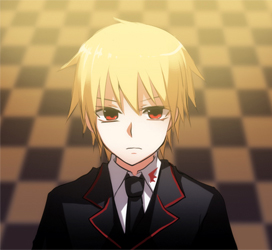 Orphaned Lark Alfen is taken to his new home by distant relatives. It's been said that his late mother was a vampire, so everyone is scared of him and doesn't want him around. He gets bullied a lot until, one day, he meets a black-haired boy named Setz who has red eyes like him. They become friends. But as a rumor spreads that Lark is also a vampire, his guardians decide to send him back to the orphanage. When Lark hears about their plans, he decides to run away, and Setz invites him to his home... in the world of real vampires.