Like us on Facebook, follow us on Twitter! Check out our new tumblr page. :)
Manga News: Toriko has come to an end; but be sure to swing by and share your favourite moments from the series!
Manhwa & Manhua News: Check out the new Manhwa and Manhua shout-out (March 2016).
Event News: One Piece Awardshas concluded. Check the results Here!
MangaHelpers > Manga > Browse > Crimezone
Home
Chapters
Translations
RSS 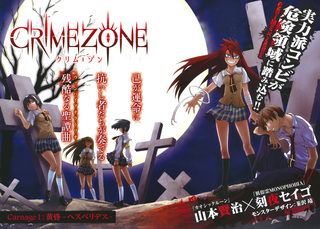 The people of Earth live in a society where vampires aren’t just real but dangerous. Although humanity has been able to keep them under control and even take the night away as the vampire’s natural habitat, some of them have adapted. Hesperides, a relatively new breed of vampires, have adapted over hundreds of years in order to be able to go outside during dusk when the sunlight is at its weakest and feast on humans.

Aburaya Shiro, a high school kid, lives in a town where there has not been a vampire attack in years, but adults keep warning them of going outside at dusk. Shiro and his classmates take this warning lightly and head out at dusk only to find out one of their classmates who they thought they knew well turnz out to be a Hesperides. With all his classmates violently murdered, the only way Shiro was able to survive was with the help of a different classmate, Ichijoji Eruka, who doesn’t seem to be human herself. [vyc]