Like us on Facebook, follow us on Twitter! Check out our new tumblr page. :)
Manga News: Toriko has come to an end; but be sure to swing by and share your favourite moments from the series!
Manhwa & Manhua News: Check out the new Manhwa and Manhua shout-out (March 2016).
Event News: One Piece Awardshas concluded. Check the results Here!
MangaHelpers > Manga > Browse > Cristo
Home
Chapters
Translations
RSS 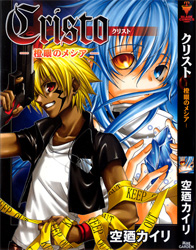 Towa became a sweeper admiring the legendary sweeper called, “Orange-Eyed Messiah”. The task of sweeper, which requires to “sweep” the monsters Adys is quite hazardous. On his first real attempt at fighting Adys, Towa encountered Kei, a former sweeper who saved him from being killed.
Towa asked Kei to take him as a student. However, not only Kei plainly rejects Towa’s request, he tells Towa that he saw the “Orange-eyed Messiah” die!? An appearance by a mysterious man who seems to be connected to Kei showed up with a grudge from the past. Who is he and what is his relationship with the “Orange-Eyed Messiah”? Will Towa finds out about Kei’s past too?