Like us on Facebook, follow us on Twitter! Check out our new tumblr page. :)
Manga News: Toriko has come to an end; but be sure to swing by and share your favourite moments from the series!
Manhwa & Manhua News: Check out the new Manhwa and Manhua shout-out (March 2016).
Event News: One Piece Awardshas concluded. Check the results Here!
MangaHelpers > Manga > Browse > Dai Go Tokusou
Home
Chapters
Translations
RSS 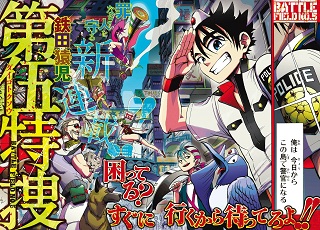 Island No. 5 is a chaotic place said to have the highest population density in the world. On this island, the police force is just a decoration and four crime syndicates act police over each of the four zones the island is divided in. Due to this, only the people who score the lowest on the police academy exam are sent to this lawless island so that they just leave things be.

Meet Inada Daigo, a 17-year-old newbie just assigned to this island, his strong sense of justice makes him pick a fight with the mafia ruling over the Northern region, where he was assigned to, on his first day. Now he will carve his name in Island No. 5's history as the strongest rookie policeman ever. [Eru13]