Like us on Facebook, follow us on Twitter! Check out our new tumblr page. :)
Manga News: Toriko has come to an end; but be sure to swing by and share your favourite moments from the series!
Manhwa & Manhua News: Check out the new Manhwa and Manhua shout-out (March 2016).
Event News: One Piece Awardshas concluded. Check the results Here!
MangaHelpers > Manga > Browse > Dankon!! Impossible
Home
Chapters
Translations
RSS 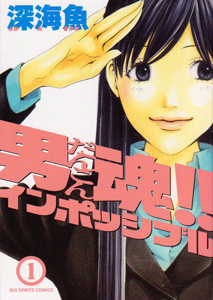 According to the organization known as the "Sexual G-Men," many Japanese men are losing interest in having sex with women. These men, known as "Panda Guys," are thought to be destroying the country by not procreating. It's the job of the G-Men, who are entirely female, to determine what's blocking these guys from wanting sex and love and to force them to overcome it. The story opens with the operative Mariko overseeing the case of a cop, Watanabe Eita, who hasn't had sex since he lost his last girlfriend. After his 'cure,' Eita ends up being recruited as the first male member of the Sexual G-Men! [tethysdust]