Like us on Facebook, follow us on Twitter! Check out our new tumblr page. :)
Manga News: Toriko has come to an end; but be sure to swing by and share your favourite moments from the series!
Manhwa & Manhua News: Check out the new Manhwa and Manhua shout-out (March 2016).
Event News: One Piece Awardshas concluded. Check the results Here!
MangaHelpers > Manga > Browse > Date Ast Like
Home
Chapters
Translations
RSS 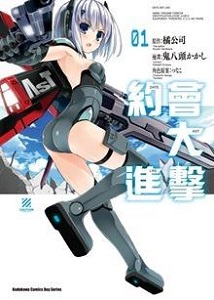 This manga is related to the "Date A Live" novel and anime. It features members of the AST (AntiSpirit Team), a special squad devoted to fighting spirits. Okamine Mikie idolizes her superior AST member, Tobiichi Origami, and may be in love with her as well. Unfortunately, Origami seems to want nothing to do with her. One day, they end up heading toward an explosion that wasn't caused by a spirit. Instead, it was caused by a girl named Ashley Sinclair, who transfers to their school shortly after the incident! [tethysdust]