Like us on Facebook, follow us on Twitter! Check out our new tumblr page. :)
Manga News: Toriko has come to an end; but be sure to swing by and share your favourite moments from the series!
Manhwa & Manhua News: Check out the new Manhwa and Manhua shout-out (March 2016).
Event News: One Piece Awardshas concluded. Check the results Here!
MangaHelpers > Manga > Browse > Datsugoku Doctor Inochiya Enma
Home
Chapters
Translations
RSS 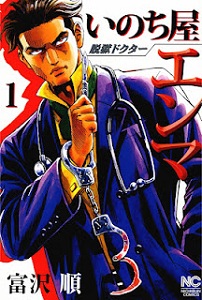 Enma Mitsuya was a highly skilled and swift surgeon, who was widely called the "Light Speed Surgeon." However, behind his bright and promising career lay a dark secret. His little sister Mitsuki was desperately sick, and he had turned to criminal means (such as selling drugs on the black market) to pay for her continuing medical treatment. He could not keep his cover forever, and all his hopes ended when he was finally arrested and sentenced to 13 years in prison.

A year into his sentence, a strange young woman named Kanon, dressed in a black nurse uniform, comes to visit him. The deal she offers may be his only chance to save his little sister. She has arranged with the prison for him to spend his nights in a jail cell with a tunnel that will allow him to escape. On every night she has a task for him, he will sneak out and be whisked off to a clandestine surgery in Kanon's "Black Ambulance". For each life the disgraced surgeon saves, he will be paid well. He can only hope that what he makes in his new career as a "Dark Surgeon" will be enough to preserve his sister's life while he finishes out his sentence...