Like us on Facebook, follow us on Twitter! Check out our new tumblr page. :)
Manga News: Toriko has come to an end; but be sure to swing by and share your favourite moments from the series!
Manhwa & Manhua News: Check out the new Manhwa and Manhua shout-out (March 2016).
Event News: One Piece Awardshas concluded. Check the results Here!
MangaHelpers > Manga > Browse > Deresuke!
Home
Chapters
Translations
RSS 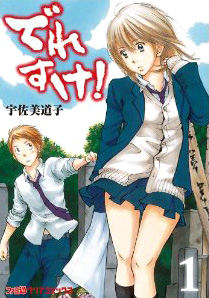 One day, high school student Daisuke is called back from his life in Tokyo to help with the family temple. It's something of a wreck, and he's supposed to help clean it up before it's sold to the city. When he arrives in his old hometown, he runs into people he once knew, such as his neighbor, Nao. Nao barely seems to note Daisuke's presence, but she is determined to keep the temple from being sold.

In addition to Nao, there are others who want the temple to be maintained-- the dead who are buried nearby. Daisuke realizes that he has the ability to see and interact with these spirits, and he sometimes can't even distinguish them from living people. Soon enough, he ends up derailing the business scheme and protecting the temple. However, there's a catch: since he ruined the deal, he has to transfer back to his old hometown and help with the upkeep. On top of handling the temple and his abandoned relationships with his childhood friends, he seems to have become the go-to guy to fix all the local ghosts' problems! [tethysdust]