Like us on Facebook, follow us on Twitter! Check out our new tumblr page. :)
Manga News: Toriko has come to an end; but be sure to swing by and share your favourite moments from the series!
Manhwa & Manhua News: Check out the new Manhwa and Manhua shout-out (March 2016).
Event News: One Piece Awardshas concluded. Check the results Here!
MangaHelpers > Manga > Browse > Dezicon
Home
Chapters
Translations
RSS 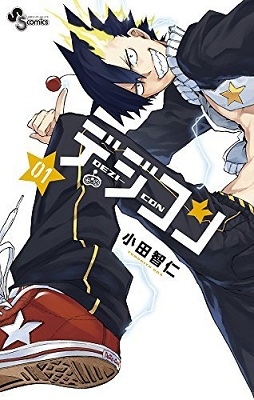 Hoshino Shiho is known in school as a major delinquent, and there are even three students who repeatedly ask her to be a part of her 'gang.' While Shiho does talk pretty rough, and she does beat up bullies when they're in her way, she really doesn't think of herself as a delinquent. One night, in her family's hot spring inn, a spaceship crashes into the bath house. The alien from inside, "Dejiraoki Seco Omega," claims he has come to conquer and destroy Earth, as he has destroyed many planets before it. Luckily for Shiho, another alien soon shows up, who manages to leash Omega to a video-game-like controller. Finding herself in possession of this controller, Shiho promptly uses it to force him to take responsibility for the mess he's made of the bath house. Now Shiho has an angry alien under her control, but who knows what else is out there to threaten the Earth? [tethysdust]