Like us on Facebook, follow us on Twitter! Check out our new tumblr page. :)
Manga News: Toriko has come to an end; but be sure to swing by and share your favourite moments from the series!
Manhwa & Manhua News: Check out the new Manhwa and Manhua shout-out (March 2016).
Event News: One Piece Awardshas concluded. Check the results Here!
MangaHelpers > Manga > Browse > Dog Soldier
Home
Chapters
Translations
RSS 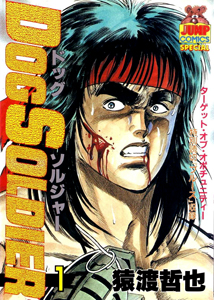 Set in America, the conservatives and leftists are at war. The leftists are building up their militia power and intelligence, which worries the government. Former US special ops member John Kyousuke Hiba is sought out to aid the government with his expertise.

Appearing to be a jobless low-life, John is actually highly skilled in martial arts and war strategies. He left the army after seeing injustice behind the scenes. He'd rather eat scraps than be a puppet to the government in exchange for money. However, he is tricked back into the business. Though unwilling at first, John soon realizes that each mission involves someone from his past and he dives at it head-on. He tries to settle old scores, but at the same time learns that there's more to what he saw in the past. Will John be able to finally be free from the government's reach? Or will he dwell deeper and know of worse things?

This manga is set mainly in the 1980s, which is fairly obvious from the character design (more similar to Ranma/Candy Candy than Naruto/Bleach). The storyline somewhat resembles an 80s/90s militia action movie (think Rambo, or Braddock), but the main characters maintain the typical manga "I'm doing it my way" personality. Being this genre, there is a lot of blood-spouting, head-slashing action and explosions, so be warned! [6gatsu]