Like us on Facebook, follow us on Twitter! Check out our new tumblr page. :)
Manga News: Toriko has come to an end; but be sure to swing by and share your favourite moments from the series!
Manhwa & Manhua News: Check out the new Manhwa and Manhua shout-out (March 2016).
Event News: One Piece Awardshas concluded. Check the results Here!
MangaHelpers > Manga > Browse > Dokidoki Kanehirando Kakeppuchi Mankin Nikki
Home
Chapters
Translations
RSS 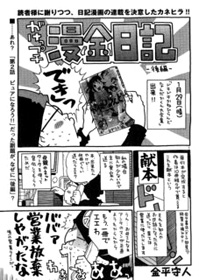 Kanehira, a manga artist has been in a slump lately. His semi popular series ended and his attempts at a new series have been a failure. The reader responses have been nothing but negative and, on top of that, his friends and family don’t understand his work at all. All out of ideas, Kanehira decides to keep a diary of his life in manga form and use that as a new series. His interactions with his friends and family to the meetings he has with editors of manga magazines are all recorded in this picture format journal. [vyc]