Like us on Facebook, follow us on Twitter! Check out our new tumblr page. :)
Manga News: Toriko has come to an end; but be sure to swing by and share your favourite moments from the series!
Manhwa & Manhua News: Check out the new Manhwa and Manhua shout-out (March 2016).
Event News: One Piece Awardshas concluded. Check the results Here!
MangaHelpers > Manga > Browse > Dorapuri - Dragon Princess
Home
Chapters
Translations
RSS 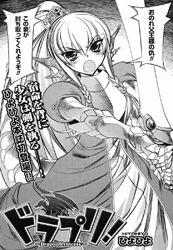 In a kingdom of dragons, a hero appears and challenges the king. The king and the hero fought an enormous battle, but the king falls against the hero and the hero claims the throne of the kingdom! The kingdom is now in the hands of a mere human who dare calls himself a king! Unable to stand this atrocity, the dragon princess, Vitoria, challenges the hero to fight to the death! Will Vitoria succeed in achieving revenge for her fallen father!? [Mamo]