Like us on Facebook, follow us on Twitter! Check out our new tumblr page. :)
Manga News: Toriko has come to an end; but be sure to swing by and share your favourite moments from the series!
Manhwa & Manhua News: Check out the new Manhwa and Manhua shout-out (March 2016).
Event News: One Piece Awardshas concluded. Check the results Here!
MangaHelpers > Manga > Browse > Dororo
Home
Chapters
Translations
RSS 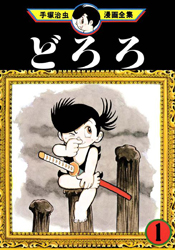 "Dororo" is a thriller Manga, which revolves around a rounin during the Sengoku period. He was born malformed, limbless and without facial features or internal organs. This was the result of his birth father daimyo Daigo Kagemitsu forging a pact with 48 sealed demons so that he might rule the world. In return, he promised the demons could each obtain a piece of his unborn child's body. This enabled them to roam free and commit atrocities along the countryside.

With his mother forced to set him adrift on the river, lest he be killed by his father, the infant was subsequently found and raised by Dr. Honma, a medicine man who used healing magic and alchemical methods to give the child prostheses crafted from the remains of children who had died in the war. The boy became nearly invincible against any mortal blow as a result of the protheses and healing magic. Grafted into his left arm was a very special blade that a travelling storyteller presented to Dr. Honma, believing it was fated to be within his possession given that ever since the boy had been discovered, the doctor had been visited by goblins. As revealed in a short tale about the blade's origin, the blade had been forged out of vengeance to kill goblins as well as other supernatural entities.

On the day the doctor died, the young man learned of the curse that had be set upon him at birth and that by killing the demons responsible he could reclaim the stolen pieces of his body and thus regain his humanity. Across his travels, he earned the name "Hyakkimaru" (百鬼丸) among other names for his inhuman nature. On one such hunt of a demon, Hyakkimaru came across a young orphan thief named Dororo who thereafter travels by his side through the war-torn countryside.