Like us on Facebook, follow us on Twitter! Check out our new tumblr page. :)
Manga News: Toriko has come to an end; but be sure to swing by and share your favourite moments from the series!
Manhwa & Manhua News: Check out the new Manhwa and Manhua shout-out (March 2016).
Event News: One Piece Awardshas concluded. Check the results Here!
MangaHelpers > Manga > Browse > Double Heroine
Home
Chapters
Translations
RSS 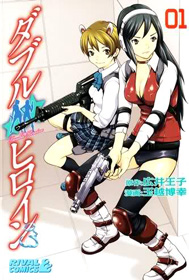 In the near future, a large meteor strikes Japan on what is now being called "Dark Sunday" and completely destroys the country. With the help of the US and China, Japan was able to construct New Tokyo, which has 50m walls built around it to protect the city from the contamination outside. With crime rates rocketing, the New Tokyo Police Squad was formed to bring peace to the new city. Rachael is the top field operative who has solved, captured or killed countless cases and criminals. However, she refuses to take a partner after her old partner was murdered. But Rachael soon finds herself working with Mizutani Asuka, a young girl newly recruited by the police squad, and, to her surprise, Asuka is a better marksman and has superior combat skills to Rachael. That’s a given though since her new partner is an android. [vyc]