Like us on Facebook, follow us on Twitter! Check out our new tumblr page. :)
Manga News: Toriko has come to an end; but be sure to swing by and share your favourite moments from the series!
Manhwa & Manhua News: Check out the new Manhwa and Manhua shout-out (March 2016).
Event News: One Piece Awardshas concluded. Check the results Here!
MangaHelpers > Manga > Browse > Double School Kids
Home
Chapters
Translations
RSS 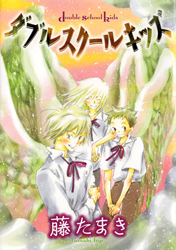 Erisha, Sara, and Tobito were abandoned children raised by the nun, Sister Mary, at an orphanage in the country. One day she tells them a secret; when they were young, the three of them died in an epidemic. As she wept by their bodies, an angel came and returned them to life, leaving instructions for them to grow up well and become the angel's helpers.

Now Sister Mary has sent the three children to a boarding school in the city. There is a secret confessional room at the ruins of a chapel near the school, and it is rumored that if you confess your troubles there, strange miracles will occur. The three of them have discovered the entrance to this room. Secretly, they listen to the troubles of their classmates and practice the art of rescuing them.