Like us on Facebook, follow us on Twitter! Check out our new tumblr page. :)
Manga News: Toriko has come to an end; but be sure to swing by and share your favourite moments from the series!
Manhwa & Manhua News: Check out the new Manhwa and Manhua shout-out (March 2016).
Event News: One Piece Awardshas concluded. Check the results Here!
MangaHelpers > Manga > Browse > Joou Kishi Monogatari
Home
Chapters
Translations
RSS 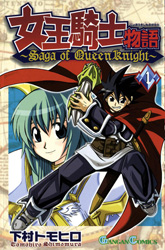 During his childhood, Elt Fohenheim saw a "Queen Knight," one of the knights who are the epitome of righteousness, fight off an enemy attempting to assassinate the Queen at the parade dedicated to the 10th anniversary of her coronation. From then on, Elt became fascinated with them and decided to become a "Queen Knight." They have the highest knight ranking in the Alslia Kingdom and are dedicated to protecting the Queen and Princess. At the parade, he met a princess of Alslia, Alma, and he fell in love at first sight. He then decided to be a "Queen Knight" to protect her. Seven years later, Elt goes to the capital to take the test to be a "Queen Knight"... [houbi]