Like us on Facebook, follow us on Twitter! Check out our new tumblr page. :)
Manga News: Toriko has come to an end; but be sure to swing by and share your favourite moments from the series!
Manhwa & Manhua News: Check out the new Manhwa and Manhua shout-out (March 2016).
Event News: One Piece Awardshas concluded. Check the results Here!
MangaHelpers > Manga > Browse > Kagemusha Tokugawa Ieyasu
Home
Chapters
Translations
RSS 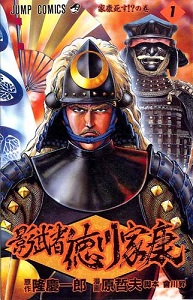 During the feudal era, warlords were not only in danger from enemies outside the castle, but also from within like their own lieutenants they trusted. To protect themselves, they secretly began to use decoys of themselves. Honda Masanobu was part of Tokugawa Ieyasu’s council and also his closest friend. However, to defend his home country from Oda Nobunaga’s campaign, he leaves his position. During the 10 years on the battlefield, he meets Jirosaburo Motonobu who looks almost identical to his former master. Masanobu comes to realize that Jirosaburo must become Ieyasu’s shadow because of his trustworthy character and battle experience. [vyc]