Like us on Facebook, follow us on Twitter! Check out our new tumblr page. :)
Manga News: Toriko has come to an end; but be sure to swing by and share your favourite moments from the series!
Manhwa & Manhua News: Check out the new Manhwa and Manhua shout-out (March 2016).
Event News: One Piece Awardshas concluded. Check the results Here!
MangaHelpers > Manga > Browse > Kamisama no Iutoori (FUJIMURA Akeji)
Home
Chapters
Translations
RSS 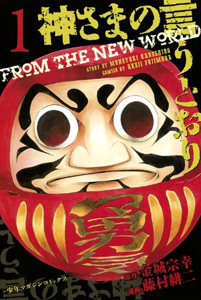 Takahata Shun's day at high school begins just as normal and boring as ever, but it doesn't end that way. After his teacher's head explodes, he and his classmates find themselves forced to play children's games, such as Daruma ga Koronda (a game like Red Light/Green Light), with deadly stakes. With no idea who is behind this mysterious deadly game session, and no way of knowing when it will finally end, the only thing Shun and other students can do is keep trying to win... [tethysdust]