Like us on Facebook, follow us on Twitter! Check out our new tumblr page. :)
Manga News: Toriko has come to an end; but be sure to swing by and share your favourite moments from the series!
Manhwa & Manhua News: Check out the new Manhwa and Manhua shout-out (March 2016).
Event News: One Piece Awardshas concluded. Check the results Here!
MangaHelpers > Manga > Browse > Kedamono no Uta
Home
Chapters
Translations
RSS 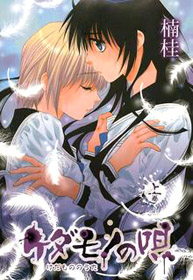 Sakurai Otoha had been assaulted in an abandoned building when her high school classmate Hinata Yui found her. Otoha can’t recall what her assailant looked like, since her mind shut that part out to protect herself, but finds comfort in Yui. Yui believes that by bringing her back to the scene of the crime, she can get Otoha to remember and catch the criminal to put an end to it. However, Yui herself becomes a victim and dies bleeding in Otoha’s arms which puts her deeper into an unhealthy mental state. Several days later, a girl named Kusaka Yu transfers to the school and completely freaks everyone out because she looks identical to Yui... [vyc]