Like us on Facebook, follow us on Twitter! Check out our new tumblr page. :)
Manga News: Toriko has come to an end; but be sure to swing by and share your favourite moments from the series!
Manhwa & Manhua News: Check out the new Manhwa and Manhua shout-out (March 2016).
Event News: One Piece Awardshas concluded. Check the results Here!
MangaHelpers > Manga > Browse > Log Horizon
Home
Chapters
Translations
RSS 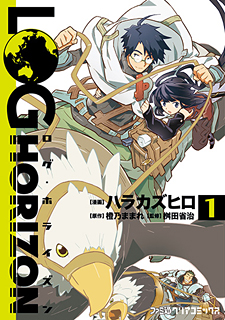 How would you react if one day you were sucked into an MMORPG and could never get out? After a mysterious incident, roughly 30,000 players from Japan are now forced to live their life inside the MMORPG "Ender Tales" and can not log out. Even death is met with a respawn. Even worse is the fact that food has absolutely no taste. All this combined, many of the players inside this MMO has lost any will to actually play this game, but they are never allowed to leave. A played named Shiro will venture forth to uncover the mystery behind the reason why they are inside this game. [DrCoke]