Like us on Facebook, follow us on Twitter! Check out our new tumblr page. :)
Manga News: Toriko has come to an end; but be sure to swing by and share your favourite moments from the series!
Manhwa & Manhua News: Check out the new Manhwa and Manhua shout-out (March 2016).
Event News: One Piece Awardshas concluded. Check the results Here!
MangaHelpers > Manga > Browse > Destro 246
Home
Chapters
Translations
RSS 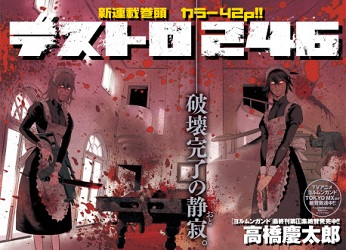 Billionaire Tono Ryuichi, the President of Tono Foods Group, a giant food company, recently acquired two young female assassins from the Mexican cartel. Sui and Ai came from unimaginably poor childhoods and was given a choice between killing people or selling their body. They chose the former and went through an inconceivably extreme training and, at 17 years old, they have become one of the deadliest assassins in the world. They are absolutely obedient to their master and they are given the task of finding the killer that poisoned Ryuichi’s wife and child. They begin attending high school to blend into society and, at the same time, read and study which helps them become even more deadlier on the field. Sui and Ai encounter Matoba Imari who is a high school assassin herself and may be more skilled than both of them. But unlike the two, Imari just wants to lead a normal life. Whatever Imari wishes for her life is not their problem because the only thing Sui and Ai feeds on are bloodthirst and a challenge. [vyc]