Like us on Facebook, follow us on Twitter! Check out our new tumblr page. :)
Manga News: Toriko has come to an end; but be sure to swing by and share your favourite moments from the series!
Manhwa & Manhua News: Check out the new Manhwa and Manhua shout-out (March 2016).
Event News: One Piece Awardshas concluded. Check the results Here!
MangaHelpers > Manga > Browse > Ageha
Home
Chapters
Translations
RSS 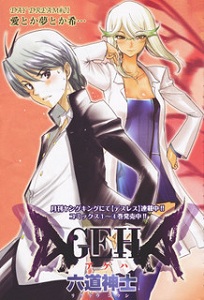 Tateha Shinki has been going steady with his girlfriend Ageha for a year now. They were finally ready to take the relationship to the next step by having sex, but just as they were about to start, Ageha dies. According to Ageha’s mysterious older sister, this has been going on forever in a continuous loop. Every version of Shinki and Ageha in all the parallel universes eventually end with Ageha’s death when the two lovers try to make love. Although Shinki has the option of giving up the relationship with Ageha and preventing her death, their love for each other is too strong. So Shinki will go through all of the infinite possibilities of their relationship until he finds the one that will save Ageha. [vyc]