Like us on Facebook, follow us on Twitter! Check out our new tumblr page. :)
Manga News: Toriko has come to an end; but be sure to swing by and share your favourite moments from the series!
Manhwa & Manhua News: Check out the new Manhwa and Manhua shout-out (March 2016).
Event News: One Piece Awardshas concluded. Check the results Here!
MangaHelpers > Manga > Browse > Cage of Eden
Home
Chapters
Translations
Thread
RSS 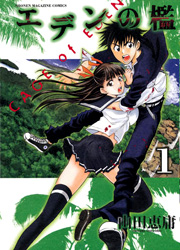 Akira and his classmates are travelling on a plane when it crashes onto an island inhabited by species thought to have been extinct. The situation becomes increasingly desperate as some of Akira's classmates are eaten alive, while some kill others in desperation. Now Akira and a few other survivors are trying to survive what seems to be a horrible nightmare.

Akira and his classmates are on a plane coming back from their school trip. the plane crashes on an island inhabited by animals thought to of been extinct. Some of his classmates attack by the animals and some kill each others in desperation. The world that he wanted to change now change, and what he and few survivors will do to survive ? Permalink " "
Review by Neo-X Subs

Akira, the main character in this manga, is kind of an average guy, maybe slightly on the delinquent side. He has a major crush on his childhood friend Rion, but has an inferiority complex and feels that he's just not good enough for her. When their airplane crashes and strands 150 students from their high school together with about 150 other people on a mysterious island in the Pacific, he finally gets to show some more of his good sides. He turns out to be a guy who stands up for his friends (and even strangers) in the face of giant monsters and other dangers, and people gradually start trusting him more and relying on him. Rion also seems to be quite in love with him, although she doesn't admit it. Will they ever get each other?

The character development in this manga is pretty weak. We get only very little insight into the background and thinking of the many characters, not even much on the main character himself. The story, while intriguing, is construed. It attempts to be realistic at times and even features scientific explanations of animal behavior or natural phenomena, but everything on this island is exaggerated. Especially the way in which the main character manages to escape from deadly situations is often just a little too convenient. But I guess if he died right away, there wouldn't be much of a story either...

The story of course involves fighting giant monsters and other "natural" enemies, but finding food, water, and shelter, and surviving in the wild, soon becomes a minor theme. The major problem is that people are overwhelmed with the hopelessness of getting off the island, and without proper social structures, lose their fear of consequences and punishment and start acting on their base instincts, tyrannizing, raping, and killing each other. Taken together with the frequent panty shots and occasional nudity, the fact that the victims tend to be women makes this manga feel like some sort of violent porn at times. Picture yourself stranded on an island with most of the girls in your high school, and no one to prevent you from doing whatever you want. Well, you get the idea. But oh wait, don't get too carried away, because Akira will stop you, and in the end you'll be eaten by a giant monster. Oh well.

I still like the manga and enjoy reading it, but it is too shallow to be really good, and too gory to be considered light entertainment. I couldn't honestly recommend it to anyone, at least not without a lot of caveats. Well, now that you know what to expect, enjoy! Permalink " "
Review by Cococrash11