Like us on Facebook, follow us on Twitter! Check out our new tumblr page. :)
Manga News: Toriko has come to an end; but be sure to swing by and share your favourite moments from the series!
Manhwa & Manhua News: Check out the new Manhwa and Manhua shout-out (March 2016).
Event News: One Piece Awardshas concluded. Check the results Here!
MangaHelpers > Manga > Browse > Mahou Shoujo Pretty Bell
Home
Chapters
Translations
RSS 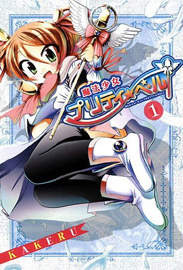 Pretty Bell is the name given to several generations of young girls who become magic using fighters through the powerful Rin Rod. They are able to summon mythical creatures and weapons to fight against the demon world. Milk and Cocoa are angels from the Heavens sent on a mission to find the next Pretty Bell. Unfortunately for them, the next candidate for the position is Takada Atsushi, a middle aged bodybuilding muscle man who owns his own gym.

Atsushi, as unlikely as it may sound, fits in fairly well with the position. His physical strength and combat skills are enhanced with the magical power, making him a deadly force to be reckoned with. As wave after wave of demon horde come after the new Pretty Bell, the weird looking hero has to protect the human race. [vyc]