Like us on Facebook, follow us on Twitter! Check out our new tumblr page. :)
Manga News: Toriko has come to an end; but be sure to swing by and share your favourite moments from the series!
Manhwa & Manhua News: Check out the new Manhwa and Manhua shout-out (March 2016).
Event News: One Piece Awardshas concluded. Check the results Here!
MangaHelpers > Manga > Browse > Mai-hime
Home
Chapters
Translations
RSS 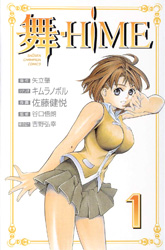 Yuuichi Tate is overjoyed: He gets to go to a brand new high school. Of course, then he just happens to find out the school he choose is under frequent attack by strange creatures called ''Orphans'', and the school set up a special task force of female members called ''HiME''s, using various elements as their powers, to battle these invaders. That's not all, though. Each member of the HiME task force has their own, unique ''Key'', another person whom, upon being discovered, can team up with the HiME to create a ''Child'', a combative unit specifically needed to effectively battle these Orphans. And with Yuuichi's luck, he just happens to find out he's not just the ''Key'' for one of the HiMEs, but for two... Two highly competitive, rival schoolgirls. And that's only the start of the trouble. [From Tokyopop]