Like us on Facebook, follow us on Twitter! Check out our new tumblr page. :)
Manga News: Toriko has come to an end; but be sure to swing by and share your favourite moments from the series!
Manhwa & Manhua News: Check out the new Manhwa and Manhua shout-out (March 2016).
Event News: One Piece Awardshas concluded. Check the results Here!
MangaHelpers > Manga > Browse > Raymond
Home
Chapters
Translations
RSS 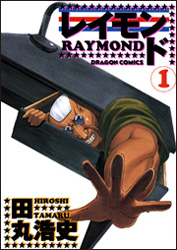 One day, Mizuki finds a strange foreign man inside her desk drawer! He claims he is Raymond, a marine-type robot from the future, but he tells them all this in English, since he doesn't know Japanese at all. Mizuki and her mother are completely bewildered as they attempt to apply their mostly-forgotten English skills to figuring out who Raymond is and why he is in their house! When they finally manage to get some understanding between them, he proves that he is a robot by pulling futuristic objects, like an "Anywhere Helicopter" out of his pants. Mizuki and her mother have no idea what to make of this stranger, but he claims he was sent back to them for a reason, by future-Mizuki's son... [tethysdust]

Note: The manga is complete at 3 volumes.