Like us on Facebook, follow us on Twitter! Check out our new tumblr page. :)
Manga News: Toriko has come to an end; but be sure to swing by and share your favourite moments from the series!
Manhwa & Manhua News: Check out the new Manhwa and Manhua shout-out (March 2016).
Event News: One Piece Awardshas concluded. Check the results Here!
MangaHelpers > Manga > Browse > Stardust Memories
Home
Chapters
Translations
RSS 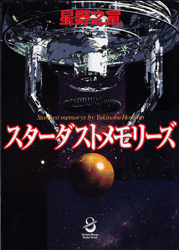 Stardust Memories is a short story compilation of human beings in the distant future where we have traveled deep into space. Each story describes a moral dilemma that people traveling in space may experience which is something that we have yet to determine in the current world.

Stardust Memories talk about such problems as the implications of having people travel for years, even decades, in the cold, quiet and endless universe. A different story tells on how human presence in a foreign galaxy will affect the environment. The topics the author decides to write about are interesting and makes you wonder of the future. [vyc]

In 1988, Hoshino Yukinobu published a science fiction anthology with Shinshokan, titled "The Great Return" (大いなる回帰). The anthology was republished with several additional stories by Scola in 1995, under the title "Stardust Memories." A reprint was issued in 1997, and the rights to the anthology were subsequently obtained by Sony Magazine, which reprinted it in 1999. The copyright to "Stardust Memories" is currently owned by Gentosha, who issued the most recent reprinting in 2004.

Most of the comics in "The Great Return" were oneshots published in Monthly Wings between 1984-86. The magazine was formerly a josei/seinen type fanzine publication dedicated to members of a circle of mangaka. In the late 1980's / early 90's, the original group gradually left the magazine, and a genre shift toward a more shoujo demographic occurred.